Living up to its resolves to play catch up, the Faculty of Pharmaceutical Sciences University of Ilorin (UNILORIN) has hosted its first ever PANS Week.

The three-day event which took place in Ilorin, Kwara State drew attention of students, academic staff and people within and outside the institution.

The first day programme witnessed a scientific exhibition and symposium tagged ‘Becoming a 7-Star Pharmacist: The Nigerian Reality” held at the new faculty lecture theatre. Aside discussing what the society expects from modern-day pharmacists, the talk also took a cursory look at pharmacy practice in the country and how it has evolved over the decades.

Towards the end of the programme, ‘El Farmaceutico,’ the official publication of UNILORIN PANS was launched amid generous donation by participants.

Day two of the Pharmacy Week saw a team of pharmacy students kicked off a health outreach among locals of Sentu, a neighbouring village in the suburb of the university campus. The villagers came en masse and were excited to partake in the outreach which featured blood pressure test, blood glucose level, body mass index calculation among others.

The third day of the PANS Week celebration featured an award dinner and cooking competition among 100 to 300 levels in which the latter emerged victorious.

Speaking with Pharmanews, Sanni Mohammed, PANS president (UNILORIN chapter) disclosed that though UNILORIN Faculty of Pharmaceutical Sciences may not be there yet, they are gradually building their way to the top.

It would be recalled that the Faculty of Pharmaceutical Sciences has just inducted its first set of pharmacy graduates in what many termed an historic feat. The colourful oath-taking ceremony of the 17 Bachelor of Pharmacy (B.Pharm) Degree graduands, which took place on May 4, 2017, attracted the rank and file of the school management officers, high profile pharmacists (both in academic and administrative positions) and excited parents. 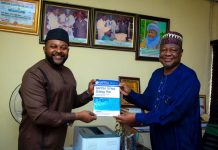