It was an emotional moment for Pharm. Eze Hyacinth Ikechukwu, at the opening ceremony of the 36th Annual National Conference of the Association of Community Pharmacists of Nigeria (ACPN), as he was announced winner of the 2017 edition of the Ahmed Yakasai Community Pharmacy Practice Support Award.

Beaming with smiles and waving to the applauding audience, Ikechukwu, managing director, Hayez Pharmacy, Owerri, Imo State received the award, which came with a plaque and a cash prize of 300,000 naira.

Expressing his delight in an emotion-laden voice, Ikechukwu was full of gratitude to the award donor, Pharm. (Alh) Ahmed Yakasai, president of the Pharmaceutical Society of Nigeria (PSN), whom he described as a “detribalised Nigerian”. 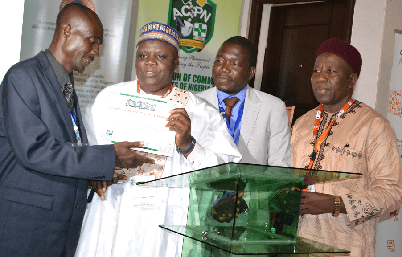 “Pharm. (Alh) Ahmed Yakasai, my president is a man who truly has the love of pharmacy at heart. I sincerely appreciate this gesture from the bottom of my heart and I hope that it will further propel me to do more for the profession I so much love and cherish. I thank the committee for doing a thorough job in the selection,” Ikechukwu said.

Attributing his emergence as winner of the award to divine intervention, Pharm. Ikechukwu said he once had a pharmacy in Abuja and was doing well, but had to relocate to Owerri, his hometown, when his premises was demolished by the government.

He added that things became even worse when armed robbers attacked his pharmacy in Owerri on three occasions, carting away huge sums of money in each instance.

He however noted that his love for Pharmacy made him to persevere and remain in the profession till today, adding that he had vowed not to leave the profession for any reason.

“Despite the challenges, I will forever remain a pharmacist and I will die a pharmacist. My advice to others out there who are facing their own challenges is that they should have faith in God. Tough times don’t last, but tough people do; and there is always an end to every battle,” he said.

Speaking at the presentation of the award, which was inaugurated in 2014 to provide financial assistance to community pharmacists, chairman of the Award Committee, Pharm. Abdulsalam Yinka Aminu, reiterated the resolve of the committee to ensure transparency in the selection of beneficiaries of the award.

Aminu, who was the immediate past chairman of ACPN-Lagos, stated that the award was a timely and significant intervention for community pharmacists, considering the capital-intensive nature of establishing and running a community pharmacy, especially in a country like Nigeria.

He noted that such gestures as the Ahmed Yakasai award could go a long way in encouraging more pharmacists to be more committed and dedicated to the profession.

“Pharm. Yakasai, to me, is undoubtedly a man with a large heart, as he singlehandedly decided to start giving out the award without discussing with anybody and without thinking of getting anything in return. He has, through the presentation of the award in 2014, 2015, 2016 and 2017 to four pharmacists outside of his state and tribe, portrayed himself as a truly forthright Nigerian,” Aminu said.

In his own address, the award donor, Yakasai said he had no intention to contest for PSN presidency when he took the decision four years ago to give 300,000 naira every year for the next ten years, adding that his intention was just to give back to the profession that he had benefitted from over the years.

“I felt I had to contribute to the development of Pharmacy from the token God had given to me. And to further prove my love for Pharmacy, if God permits, I may add ten more years to it,” Yakasai said.

The PSN president who was once Commissioner for Land and Physical Planning, and later, Commissioner for Commerce, Industry, Cooperatives & Tourism, in Kano State, disclosed that pharmacy is a unique profession.

He noted also that there is no tribalism and favouritism in the selection process for the award, saying this is evident in the tribes of people that had won it so far.

“When this young man filled the form and the committee went through it, they found a pathetic situation. This is a young gentleman that was doing well in Abuja but suddenly his premises was demolished. He then relocated to Owerri, Imo State and he was still doing very well, but unfortunately his shop was attacked three times by armed robbers. So we saw a pathetic situation and we felt it was important to assist this young and passionate man back to his feet, so that no armed robber or demolition will be able to kill his dream or put asunder the relationship between him and his practice,” Yakasai enthused. 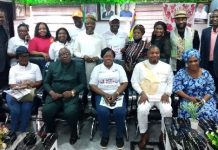