– As association inaugurates committee of past national chairmen

The newly elected National Chairman of the Association of Hospital and Administrative Pharmacists of Nigeria (AHAPN), Pharm. Olabode Ogunjemiyo, has assured that he and his team of executives will run an all-inclusive administration, which will benefit every member of the association.

He gave the assurance at the swearing-in ceremony of the new national executives of AHAPN, which held at the closing banquet of the 22nd Annual National Scientific Conference of AHAPN, Ilorin, Kwara State, recently. 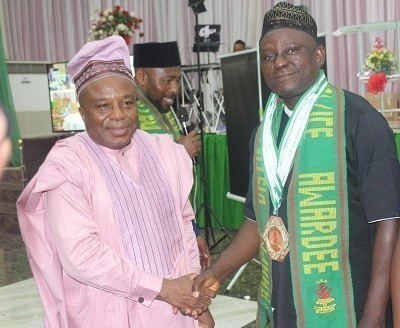 The association also inaugurated a committee of past national chairmen at the occasion. It included Pharm. Abdulaziz Idris, Pharm. Yakubu Maji-Isah, Pharm. Martins Oyewole and Dr Kingsley Amibor, the immediate past chairman. They are to serve as an advisory body to the National Executive Council of AHAPN, in resolving conflicts and related matters.

In his acceptance speech, Ogunjemiyo appreciated the Almighty God for making the day a reality in the lives of all elected members, as he cited the scriptural passage which says “there is a time for everything under the sun”.

He narrated that when he initially heard the result of the elections, he was hit with mixed feelings – excited for winning, but sober because it was call to service.

“When I was told the result of the elections, I initially wanted to start jubilating, but it later dawned on me that it was a call to service. I’m encouraged by the array of elected leaders in the team that we are going to sail through successfully, even beyond our imaginations. By the grace of God, we are not going to let down AHAPN and PSN, as we are going to put in our best, and by God’s grace, we will succeed.

“It is going to be an inclusive administration because there are no losers; it’s  certain that one person must emerge as the winner. We are going to work with everyone, including those aspirants who couldn’t scale through. On behalf of AHAPN, I say thank you all”, he said.

Dr Amibor, while delivering his valedictory speech, expressed gratitude to God and all members who had supported his administration to its successful conclusion. He noted that collaboration is key to achieving great heights, as no one is an island of knowledge.

Amibor urged the new executives to collaborate and work as a united body to the growth of the association.

He recalled how the journey began three years ago for his administration, with an 8-point agenda to rebrand and reposition hospital and administrative practice in the country, adding that almost all the goals had been accomplished.

READ
Update On Pharmanews For Our Readers and Advertisers

“Three years ago, we did promise to rebrand and reposition hospital and administrative pharmacy practice, for which we set up an 8-point agenda.  Then, core dispensing was the order of the day in our health institutions. Today, I am glad to report that virtually all of the 8-point agenda have been fulfilled.

“Consultancy pharmacy practice, pharmaceutical care, specialisation and sub-specialisation are now the order of the day. This feat was not just achieved by a solo effort, but through collaboration with other stakeholders,” he said.