Prof. Karniyus Gamaniel, director general, National Institute of Pharmaceutical Research and Development (NIPRD) has said that the production of a new medicine usually gulps about $802 million and often takes between 10 and 15 years to develop.

Gamaniel made this disclosure while delivering the keynote address for the 15th Annual National Conference and Scientific Meeting of the Nigeria Association of Pharmacists in Academia (NAPA), held recently at the Sickle Cell Centre, Idi-Araba, Lagos, noting that pharmacists should invest more in research and development (R & D).

“The drug discovery and development process is not an easy one. It takes 10 to 15 years and $802 million to develop one new medicine. Let us think about how to develop our products locally and present to the authorities,” he declared. 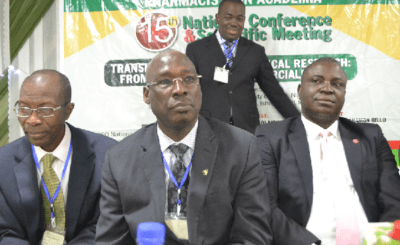 Buttressing his point, Gamaniel said: “For instance, South Korea and Malaysia were once on the same level with Nigeria. Now they have left us behind. Today, the two countries have advanced far in R & D.”

The NIPRD boss noted that Nigeria has great potential to surpass these other countries, considering the successes recorded through previous laudable initiatives, such as Operation Feed the Nation (OFN), Green Revolution, Vision 2020, universities of technology and the recent trend – Economic Recovery and Growth Plan (ERGP).

“Why then are we not succeeding?” he asked. “It could only mean one thing – something is wrong! Today, we see the Association for Good Clinical Practice in Nigeria (AGCPN) lamenting about the high cost of drugs and scarcity of raw materials for pharma production in the country,” he noted.

Gamaniel, a renowned professor of Pharmacology with three United States patents in Phytomedicines, said that Nigeria as a nation can borrow a leaf from the ‘Malaysian concept.’

Explaining further, the professor recalled the case of Idris Jala, a Harvard University graduate, who was recalled from Shell Oil by the Malaysian president to salvage his country during the 2009 economic depression.

According Gamaniel, in accepting the offer, Jala was given a free hand to pick his team. Rather than adopt the conventional Broad Way policy (which entails external borrowing and bringing in foreign experts), he opted for the Narrow Way (which frowns at external interference and encourages use of local raw materials). Secondly, he selected a team comprising innovators, entrepreneurs, researchers, marketers and a host of others whom he locked away in a standard laboratory for six weeks until a blueprint for the economic recovery was drawn up.

“This was how the Malaysian palm was revived and the government is still enjoying the royalties. I believe we can borrow a leaf from such initiative. This should be the focus of NAPA too,” he said.

As a way out, the NIPRID boss recommended that the Nigerian pharmaceutical sector should look beyond production of dosage form of new drugs, while also sourcing raw materials locally and going into production of more APIs, at least, for antimalarial.

Professor S.R.A Akinbo, deputy provost, College Of Medicine, University of Lagos (CMUL), in his remarks agreed with Prof. Gamaniel’s proposition, disclosing that there was a time Asian academics and researchers used to visit  Nigeria to look at the nation’s journals and publications.

“Subsequently, they would go back, replicate the ideas and patent them. We don’t want that anymore. People tend to use the term ‘publish or perish’ to encourage researchers. In our case, we have to ‘publish and flourish.’ That should be our focal point,” he canvassed.

Calling for collaboration, Prof. Boladale Silva, chairman of the occasion, said putting heads together is the key to getting to the destination.

This was also corroborated by Sir Ifeanyi Atueyi, vice president, Nigeria Academy of Pharmacy (NAPharm), who said the academy was pleased to be part of NAPA initiative.

Atueyi recalled that NAPharm held an inter-collaborative discussion early this year at the UNILAG conference hall, with about eight professional health bodies in attendance.

“That meeting was as a result of the NAPPSA conference held in Las Vegas to promote collaboration among healthcare professionals. In all of these, the patient is the ultimate beneficiary. After all, any of us can become a patient at any time,” he stated.