Since early 2011, social media rumours have asserted plastic rice was being manufactured in China, exported, and consumed by people in other countries unaware the rice they were eating was in fact not a food at all. The rice in question is China’s Wuchang rice. The rice is very popular in china and is is famous for its smell, and it costs more for its quality (almost double the price), according to Blue Ocean Network (BON) TV report, a popular English Channel in China. 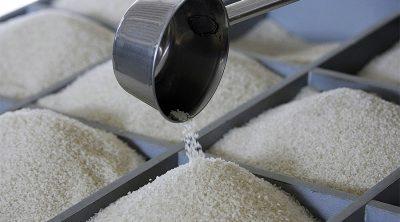 The fake rice is made by mixing a small amount of real Wuchang rice with potatoes, sweet potatoes and plastic. The potatoes are first formed into the shape of rice grains. Industrial synthetic resins are then added to the mix and then sprayed with a fragrance to replicate the original rice smell. The rice reportedly stays hard even after being cooked. According to one online publication Very Vietnam … “A Chinese Restaurant Association official said that eating three bowls of this fake rice would be like eating one plastic bag. It was also reported that annually 800,000 tons of real Wuchang rice is produced, yet 10 million tons of “Wuchang” rice is sold – whether plastic or another type of rice; more than 9 million tons of it is fake.

Nigeria has confiscated 2.5 tonnes of “plastic rice” smuggled into the country by unscrupulous businessmen, the customs service says … Lagos customs chief Haruna Mamudu said the fake rice was intended to be sold in markets during the festive season.

The BBC’s Peter Okwoche says it is the only foodstuff that crosses cultural and ethnic lines across the country. Whoever made this fake rice did an exceptionally good job – on first impression it would have fooled me. When I ran the grains through my fingers nothing felt out of the ordinary … But when I smelt a handful of the “rice” there was a faint chemical odour. Customs officials say when they cooked up the rice it was too sticky – and it was then abundantly clear this was no ordinary batch.

They’ve sent a sample to the laboratories to determine exactly what the “rice” is made of.

They are also warning the public not to consume the mystery foodstuff as it could be dangerous. Fake food scandals are thankfully rare in Nigeria when you compare it to countries such as China. However, there is no evidence that plastic rice was being circulated in Nigeria.

As you would expect, consuming this “plastic rice” is extremely harmful and toxic to one’s health, and is causing quite an uproar.