Speaking exclusively with Pharmanews at the launch of the CSR campaign in Ikorodu, where 12 first aid kits were donated to six local government development areas, founder and CEO of the pharmacy, Pharm. Mutiat Adegoke-Sanusi, disclosed that the idea of giving out the kits became necessary when she discovered that most of the local councils did not have them. 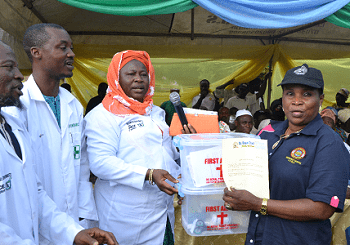 According to Adegoke-Sanusi, who had worked briefly at Airforce Medical Centre, Ikeja, before opening her own pharmacy, the gesture was “a precautionary measure to respond to emergency cases that may occur at any time before hospital intervention. Secondly, we believe that it will help lessen tension and foster relationship between local government officials and community pharmacists in each region.”

She further clarified that the initiative was purely humanitarian without any personal or political agenda.

“This has nothing to do with APC or PDP because I am not a card-carrying member of any political party. We are only seeking to give back to the community at the grassroots level, especially now that local government chairmanship and councillorship elections gather momentum as part of our corporate social responsibility.

“As a fellow Nigerian, I grew up in Lagos and still see every Lagosian as member of my constituency. Beyond local governments and council development areas, we will also be donating first aid kits to police stations and hospitals too, as the need arises,” she said.

The six beneficiaries of the inaugural donation were Ikorodu Central, Ikorodu North, Ikorodu West, Igbogbo, Ijede and Imota Local Council Development Areas. Each of the council representatives were given three first aid boxes.

Founded in 1993, De Royal Treet began as Hasmut Pharmacy before taking up its new name, in order accommodate other arms of the business such as events management and rentals. 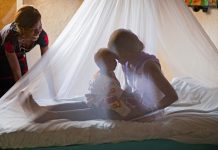